I didn’t own my hair as a child. I was merely a sharecropper who grew it for my mother’s pleasure. When I was four and my little sister was born, Mom cut it short because she could no longer manage a baby plus washing and untangling my below-the-shoulders mane, but I missed it so much that I tied her black tulle cocktail apron on my head like a veil for several months so I could pretend I still had it.

Then came the Era of the Summer Pixie Cut: very short, unadorned, with bangs. My sisters, diminutive and blond, were well-suited to it. I, however, looked like a member of a recently discovered Amazonian tribe, and a well-fed tribe at that. I needed more hair for balance, and later, when I was on my own, I grew it out until it hit the bottom of my ribs. Sometimes I pulled it back and used hairpins to capture wispy fly-aways, and one day, amazed at the number, Mother counted them out loud, as if it were proof that I’d made a bad decision.

But I was not alone. My sisters came under her scrutiny as well. Perhaps it was because she’d never allowed herself to get too crazy with the crop that she grew on her own head, wearing The Midwestern Helmet – grey, short, permed – from middle age to dotage. Mom and her sisters, who lived in Illinois, Texas, and Washington, all wore it, making us wonder if they were taking secret trips together to visit the same salon. 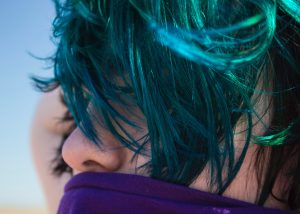 Mother passed away over 20 years ago, and since then, all three of us have gone slightly mad with freedom, including near-butch cuts, hair a good three feet long, color changes, stripes, etc. No teal yet, but it’s early.

So when I hear a business owner explaining a lack of action due to a host of reasons – lawyer doesn’t like it; banker thinks it’s risky; mentor never did it and doesn’t think they should do it, either; vendor cautioned against it; wife or husband will kill them; employees will hate it – I’ll think of the hair on my head. My head. My hair. And I’ll want to say: This is your company! Seek opinions, yes. Consider how it affects all parties, of course. But in the end, your company, your choice, just like my hair is mine.

And I will never, ever count the virtual hairpins you may need to keep things in place and running.