My sister’s boyfriend loves airplanes and hires pilots to fly them to his second home on Roche Harbor and various other wonderful places. They recently flew to meet friends who were on their boat in Canada’s Desolation Sound. 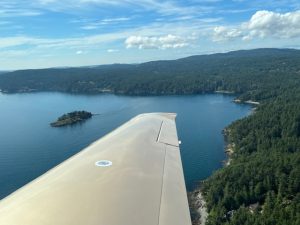 The plan was to land the DeHavilland Beaver in Cortes Bay, send it home to Seattle, and cruise back with their friends. As on Lake Union, there’s a designated waterway for landing pontoon planes, but as they descended, they realized a large sailboat had chosen to anchor at the end of it, right in the middle. It was a windy, choppy day, and it took all the pilot’s expertise to safely bring them down. But in maneuvering to avoid the sailboat, the body of the plane swung sideways, caught the wind, and was pushed out of the safe harbor and toward rock formations that line the shore outside the bay.

She was excited when she told me about it after getting home, vividly describing the landing, the stiff wind, the spray from the rocks as the plane bobbed closer, the concern of her boyfriend who stood on a pontoon and directed the pilot to call for help to get her off the plane. She declined, because she figured the worst-case scenario would be getting cold and wet and only for a few minutes, because she could already see a large and impressive tugboat chugging out of Cortes Bay, headed their way.

“It was,” she said, her eyes wide and shining, “exhilarating!”

Almost crashing into the rocks, whether physically or metaphorically, is like that: Exhilarating, intoxicating, terrifying. You buy a business, go into sales for the first time ever, or are promoted to powerful position, and the potential of spectacular failure is very real. That was my favorite time, the first two years of doing something fresh and scary, when you don’t even know what you don’t know. The rocks are right there in front of you, and you can feel the spray and hear the pounding of waves that could pull you under. That kind of exposure and stretching does not float everyone’s boat, but if you have the stomach for it and are successful, the payoffs can be huge, and I don’t just mean in money.

Of course, had my sister gone in the drink, it might not have been quite as exhilarating …