For years we had a second home on Whidbey Island, and my sister and her husband had no-bank beach cabins south of us. The 4th of July has always been a huge tradition there, the event of the year, and the residents and weekenders always turn out in full force: Trailers, boats, pontoon planes, tents, cabin cruisers, kayaks, pickleball and badminton tournaments, cornhole games, well-stoked fires … the beach is packed with people, movement, drinks, and food. To give you an idea of the immensity of the holiday, several years ago, Fred and I underwrote a taco truck that pulled into the grassy lane between cabins to provide a small family dinner for twenty-five.

Setting off fireworks in Island County is illegal, but tolerated. You’d need a police force numbering in the thousands to enforce it, so the standard operating procedure is to look the other way. There are always at least two Greenbank beach groups who collect money and hit the Indian reservations to buy artillery, and after dark, a bloodless war begins, often lasting for an hour.

Five years ago, one group bought a literal mountain of pyrotechnics, the largest that anyone had ever seen, and 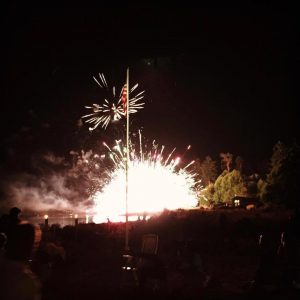 during the day folks wandered down to their end of the beach to admire it. It was going to be, everyone agreed, awesome.

And it was awesome! The whole stash accidently went up in a colossal explosion that was heard throughout central Whidbey and captured by picture-takers. Neighbors tore down the beach with fire extinguishers, and boats anchored offshore caught on fire. Police, aid cars, and firetrucks followed the blast. Terrified young children in our extended family had to be rocked to sleep that night, and instantly-sober adults put down their drinks and considered tamer things, like sparklers or poppers.

We know what it feels like to prepare for success and then realize later that over-the-top success can be a double-edged sword. We wondered at the beginning of the pandemic if we would be able to sell a small business while the world was locked down, but 2020 ended up being our best year ever. Midway through 2021, success has continued at an even faster pace, which means that our inventory levels are dropping rapidly.

Anyone have a business they’d like to sell, or know someone who does? We’ll reward you with a big pile of fireworks for next year if you send them our way! But only if you take some safety training classes first.