My mother saved magazines that featured meaningful stories, and I inherited them after she passed. While thumbing through the pages detailing Kennedy’s assassination and the moon landing, I found that I was as fascinated by the 1960s sales and marketing efforts as I was by the history.

For example, this was a Sea Monkey ad from those times. 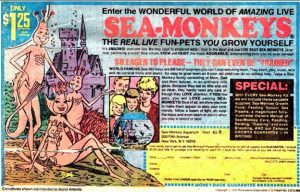 Of course, we begged our mother to buy us Sea Monkeys when we were kids, because look at them! They were adorable, and had better hair than we did! Who wouldn’t love an easy-to-care-for, regenerating pet like that? Never mind that most would be DOA. It only cost a buck and a quarter! Tragically, my mother denied us. Now, of course, I look at the ad and am appalled for a whole host of reasons. Here’s what they were: Brine Shrimp. 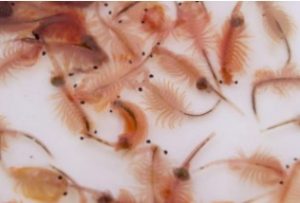 That artist was clearly on something when he did those sketches, and I think I might want whatever he was on. It’s the most blatant case of anthropomorphizing I’ve ever seen, and I watched Meerkat Manor. “Sea plasma” was thoughtfully included in the Sea Monkey kit. I don’t even want to know what that was.

I understand how playing with the truth is part sales and marketing. I appreciate a little hyperbole. That’s how customer events that attract 200 people magically morph into 300 people in the re-telling. My motto is Tell the best version of the truth that you can, meaning shine your brightest lights on the positives, but don’t deny the negatives. Just don’t shine your brightest light in the darkest corners.

The best version of the Sea Monkey truth is that yes, they are easy to care for, but are perhaps better served grilled or in a ceviche than they would serve as pets.