A German Midwestern child of the Depression, my mother would appreciate these times, because toilet paper is not the commodity that it was in the beginning of 2019, but is now precious, spun with gold, to be cherished and kept in a safe place. When my mother was in her own high-risk years as I am now, she treated TP as if the hounds of hell were baying at her door, coming for her rolls. This was a woman who had, during the Depression, eaten squirrel trapped by her father and cleaned herself with thin catalog pages, something that we were still reduced to using when we visited the outhouse at the family camp. It also helps to explain why my mother loved a buffet and never passed on the chance to go through it several times. It was all about the fear of shortfall, of not being able to get the things that you needed when you needed them.

When the Wise Men visited, they brought gold, frankincense, and myrrh. When my mother visited, she brought toilet paper, toilet paper, and toilet paper. If we stayed in a friend’s cabin, she left a TP pyramid where it could be seen when the owners entered. Rolls tumbled from her supply closet when we felt brave enough to open it, and when she felt particularly flush with it, she would offer us a roll. It was a sign of her appreciation and love. You’ve heard of T Bonds. These were TP Bonds.

When my daughter and niece were in their teens, they TP’d her house. Not the outside. The inside. And they covered 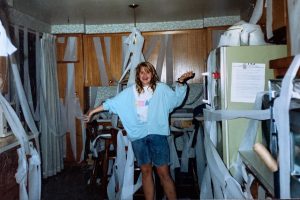 everything, even the toilet paper that was already there. Chairs, tables, sofas, beds, kitchen cabinets, toilet seats, soap in the shower, and food in the refrigerator and freezer. They also took a video of the process and shared it with her later. When she got home from work, she didn’t even pretend to be miffed. She told us all that she was honored to have been chosen. I believe that thrilled was a better word, because not only was the time-consuming gesture a loving statement from her granddaughters, but it left her with a bounty of riches. She, of course, collected it all in paper bags, and when we visited the bathrooms at her 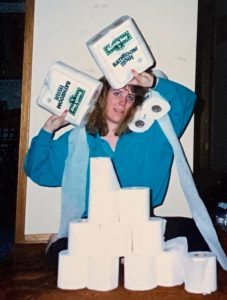 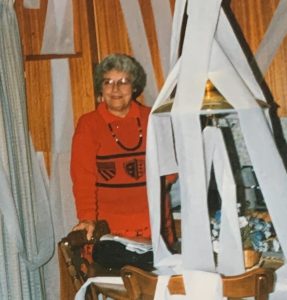 house, we didn’t tug on the tail end of a sheet and pull it down, but instead reached into a paper bag and pulled it up.

So Mother, if you could see the world right now, you would be vindicated!