Come September, 2023, The Quincy Group will have been in business for 20 years. Twenty years is a meaningful marker, in part because we created the company as an afterthought, something to keep us curious and challenged after leaving corporate management and selling our second business. Who knew at the time that it would be so deeply meaningful and sustainable? But there’s another anniversary we’re celebrating: Thirty-seven years of marriage. I know it’s not a mathematically meaningful number. Unlike a 25th anniversary (silver) or a 50th (gold) or 60th (diamond), there are no precious jewels attached to it, but there are a couple of reasons why I’m making note of it:

Reason Number 1: We went to El Gaucho for a celebratory dinner on Saturday, and my sisters surprised us by 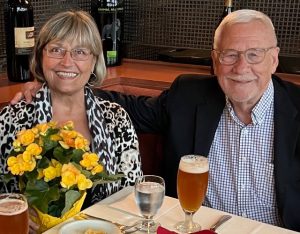 bringing flowers, prompting the waitress to take our picture. We were at a corner table, thus Fred’s long reach. But in spite of the fact that we could fit another person between us, it’s a good picture. And yes, in my book, that’s a good enough reason to use it in a blog.

Reason Number 2: I’m flying back to Illinois today with my sister. We’re hitting some reunions, both school and family, and I’ll be home next Tuesday. And here’s the thing: Flight day is also Anniversary Day, something I never considered when my sister and I booked it, although now I know better, because Fred has mentioned that fact more than once. More than twice, actually, but who’s counting?

But he understood how my brain works (or doesn’t) before he married me. Movie start times (we would arrive in the middle of the feature), which evening our friends asked us to dinner at their house (we showed up at their door, and they weren’t home), which year I booked a vacation rental (again, we showed up at the door. Yes. I did that) … there are a host of long and funny stories one could tell at my expense. Honestly, there’s not enough space in a blog to cover it all. It’s amazing to me that I acted as a corporate event planner and provide that service for clients now, and never had any hiccups like the ones my husband has suffered through.

Anyway, this blog is his anniversary gift. Happy 37th, babe! I’ll have a Bloody Mary on the flight in your honor. Or maybe two. But as I said, who’s counting?