We took the family to Eden Valley Ranch again this year. It’s located in the Okanogan Highlands east of Oroville, and this time, it was to celebrate my birthday. Fred and I decided to take the long way home, driving over the North Cascades Highway, stopping at a microbrewery in Winthrop before heading to Mazama.

Days before, on our first night at the ranch, we sat outside our cabin and listened to thunder. The skies above us were clear, but given how noise bounces off the hills, we guessed it was coming from the east. After hooking up to wifi, we found that it had been west of us, in the Twisp area. Warnings had been issued regarding lightning strikes, potential wildfires, and flash floods, but none of these things were on our minds when we started down the Methow Valley towards the pass. That is, until we drove past the signs: Potential road closure ahead, Wildfire staging areas, Slow, Be prepared to turn around. SR20 was still open, but we were officially warned.

It wasn’t long before we could see white smoke, at first only mildly disconcerting, but as we moved further into the pass, the smoke 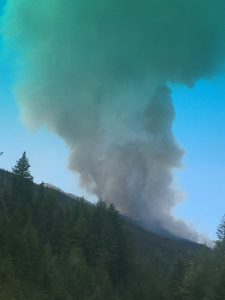 became more evident, darker, ominous, and through it we could see flames licking at the ridgetops. But it was a smaller fire that jumped north over 20, one that started with a tall tree shooting flames straight up a narrow rocky defile, that made our hearts stop. As we watched, two red-parachuted smokejumpers 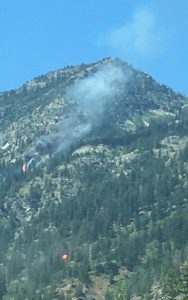 landed below it. I’ll never again be able to read the word “smokejumper” without feeling what I did that day. Rarely do we get to witness them in action, and knowing where they landed vs. where they needed to be, knowing that they probably wear heavy boots and clothing for safety purposes, knowing that they must be hauling fire fighting equipment with them, knowing that they would need to climb what looked to be a 40-degree-angle mountainside in 90-degree heat, we were awestruck.

And think about this: It’s a job done willingly. It’s not easy to become a smokejumper. There’s a lot of competition for every opening. There’s training on top of training on top of training, with exercises meant to weed out the weak. They are the elite special ops of firefighting, adrenaline junkies with a mission. The job is seasonal and dangerous. What I can’t even imagine on my wildest and worst day is their daily seasonal fare.

The drive was awesome and awful at the same time, and they closed the pass the day after we crossed it. Fires are to continuing to burn west and north of Winthrop. Think good thoughts for firefighters everywhere! 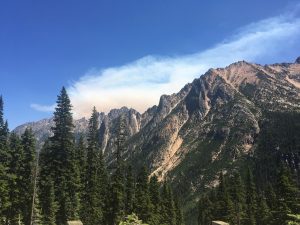