Sales takes many forms: Inside vs. outside, straight commission vs. salaried, hunter vs. farmer, long-term business-to-business vs. one-off retail. Clearly, sales is not a one-size-fits-all career, and because of the many different forms that exist, finding the right person for a sales job can be more critical in this sector of commerce than anywhere else.

Back in my management days, we had evening events where sales reps treated their inside partners to dinner, drinks, and amusements like bowling and indoor car racing. But the event that made the biggest impression on me was laser tag. Nothing made the inherent differences in this talented group of people more obvious than that. 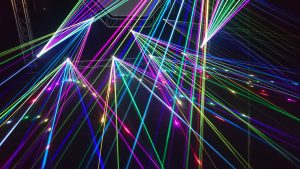 We broke into teams: Inside sales and their manager vs. outside sales and me. We went through orientation, were fitted with vests covered with sensors, and shown how to handle our lasers and recharge them, which involved standing in front of one of the stations along the wall. There were large blocks piled on top of each other in the field of play that created protected areas, and other smaller structures were strewn across the floor for taking cover. They turned on the music, set the timer for a half hour, turned off the bright lights, and turned on the blacklights.

The outside sales reps spent the first few minutes laughing at our shining but unsettling smiles, and thoughtfully pointing out any lint evident on each other, which appeared radioactive. In the meantime, the inside sales reps took a defensive stance, claimed one of the forts as their own, came up with a plan, and began firing at us. Caught unaware because we were still laughing at each other, the outside sales staff scattered and started shooting. Our efforts were random, because we’d yet to realize that our inside partners were hunkered down as a big group. We, on the other hand, ran from one end of the room to the other, shooting at whatever we saw, which was often each other.

We clustered behind the other fort and discussed our options. We knew they’d have to eventually leave the fort to charge their lasers, and then we could pick them off one by one. There was debate about that, of course, and how to best accomplish it, and during that time, half the inside sales team managed to recharge. Angry at having been had, we left the fort and ran for their side of the room, shooting at the blocks they hid behind while they picked us off and scored a whopping number of points.

At the end, the score was something like 90,000 for inside vs. 900 for outside. I kept the score sheet for years because I thought it was so funny and telling. Outside sales: mavericks, cowboys, on their own, believing their way is the best, aggressive but sometimes off the mark; Inside sales: more timid, playing the defensive game, into safety, staying in a group, working together … the way that both teams played the game fit the form of sales they supported.

So the lesson is to understand the type of sales rep you’re looking for, and to hire accordingly. And the other lesson is don’t ever ask a bunch of straight-commissioned sales reps to be on your team if you’re playing laser tag.