People who are not in the sales profession sometimes believe that you need the gift of gab to be a successful salesperson, but I believe that a gift for listening is far more important.

I know it’s not easy to slow down and listen when you’re excited and feel you have a lot to offer. I get it. When I was a rookie, listening was not my default setting. Silence made me nervous. I sometimes broke into a cold sweat and swore I could hear crickets when a customer was slow to fill a gap, but I taught myself to pause and breathe and fight my natural urges. They didn’t need prompting from me. They just needed time and my attention.

When I went into management, I kept some of my larger accounts so I wouldn’t forget what it was like to be on the front lines, plus I wanted customers to get used to the idea of having a new sales rep. Eventually I had to turn them all over, and in one case, I took an experienced rep to an introductory meeting and was shocked when his first act 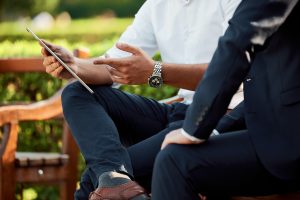 after being seated was to spout the company mission statement and then gush a deep rushing stream of sales blabber, buzzword after buzzword, as my customer’s eyes clouded and his arms crossed. Part of me admired the rep’s lung capacity, but the other part of me reached over and grabbed his knee, hidden under the edge of the desk, and squeezed it so hard that he limped until the day he left the company. Sometimes when reps became sales-spouting automatons but were beyond my reach, I’d silence them with a look so hard and penetrating that it left facial scarring. They didn’t call me The Dragon Lady for nothing.

When you visit potential clients, listen very carefully to what they say. When you ask who they currently use for the services you provide, listen not only to what they say, but what they don’t say. If they name a competitor but don’t add something like, “and it would kill me if we lost them,” or “they are absolutely the best,” they could be an account worth pursuing.

It can sometimes be harder to listen to longtime clients than to prospects – the same applies in real life; ask my husband – but the same rules apply. Old complaints or fault-listing need to be allowed, and often there’s a truth buried there that you would do well to consider.

And if you don’t, I’ll find you and give you The Look. Not a fun thing. Ask my husband. And my daughter.

The weather has finally allowed me to get out in ... View Post

A few years ago I shopped at a shoe store ... View Post

The Art of Listening

People who are not in the sales profession sometimes believe ... View Post

When we owned our printing company, Fred did a brilliant ... View Post
Read All | RSS