We loved taking trips to the mountains when we were kids. Unlike today, where we can be in the heart of the Cascades in a half hour, the Rockies were a two-day drive from our prairie home. Every Summer we packed our station wagon with a heavy canvas tent and camping gear and made the trek to Rocky Mountain National Park, 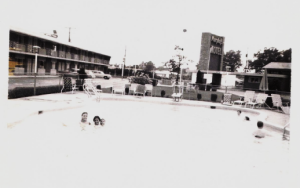 staying at least a week or more and repeating cherished traditions: Standing outside the Estes Park Catholic church for mass because there was never room inside, checking into a motel with a pool for one night of swimming and a morning of showers, and the sisters going on a horseback trail ride.

We took side trips to Garden of the Gods, Grand Lake, Trail Ridge Road, and Glen Haven, a tiny Winthrop, Washington-like tourist attraction that never reached its full potential but still resolutely sported false-fronted Western buildings and staged a cowboy shootout on the main street every other hour. One year, right after the good guys dispatched the bad, a horse came careening around a corner with a boy of eight or nine clinging to it and screaming. At first we thought it was part of the show, a cowboy rescue finale we’d not witnessed before, but we soon realized the terror on the kid’s face was real, as were his screams. Being careful children of an insurance adjustor with German DNA on both sides, we were as terrified and pale as the boy who was racing away in a cloud of dust. Attempting to make it all okay, Dad gave a shaky laugh and said, “Don’t worry. Kid was probably born on a horse!”

But he was not, and within seconds, a pack of seasoned riders pulled tight around that same corner, whipping their horses in an attempt to catch up with him.

To this day, our family uses that phrase when things are as they seem.

“Oh, I bet he didn’t really know what he was doing when he said that to you.”

“Yeah. And the kid was probably born on a horse.”

It can apply to businesses as well.

Fred: “I’m sorry, but unless there’s something else going on that I don’t see in these P&Ls and tax returns, I’m afraid we won’t be able to sell your business.”

Owner: “But there’s goodwill, a new website, great reviews, and the possibilities are endless!”

Pat, to herself: “And the kid was probably born on a horse.”

Here’s what we’ve learned after all these years: If the business documentation does not add up, then it is exactly what it looks like, because that’s what an informed buyer considers, black and white, bottom line. So we sometimes gently send a unconvinced seller on their way with a list of For Sale by Owner tools and suggestions, because we believe in hope, but not in false promises.

Happy trails to you!