As part of my Maria Kondo COVID Clean-Out project, I went through an old dome top steamer trunk where I’ve been keeping items from our family history. During my search, I was reminded of why my sisters and I are successfully self-employed. It’s because we were small business owners as soon as we reached the age of reason. If we could walk unassisted, then we could produce and sell. There were several reasons for this: My mother, no extra money lying around, and my mother. If we whined about having nothing to do on long, hot summer days, she wouldn’t whip out her wallet to pay for ballet lessons or games or treats, but instead would whip out a universe of ideas, things that we could do with our time, ways to make the money to buy the games and candy that we wanted. Thus armed, we produced a neighborhood periodical using spare paper, pencils, and rubber stamps from Mother’s youth. The content was hyper-local, with reports on the barn cat having kittens and lists of the roadkill we counted by riding bikes on our road as far as we were allowed. The price to readers, who were either charmed or terrified by the three of us as we sold it door-to-door, was a nickel. We also put on shows in the basement and charged admission. The insipid Disney version of “Babes in Toyland” occupied a whole summer. It was a musical, and we had the 45s, all of which we memorized. Although I can’t remember what day Fred and I were married, I can remember every lyric to those songs, as can my sisters. We designed the clothes and scenery, and my mother baked cookies, which we sold as well.

But what most caught my eye was a clipping of a newspaper ad for one of our summer Sand Stores. An ad! In a real newspaper, not just our own! We’d moved to a small farm town and had a fresh audience of potential customers, so we decided to go big. My mother bought white sand from a building materials company, and we dyed it with food coloring. She saved bottles – mostly wide-sided and narrow-necked ones used for salad dressing – and we created sand art in them. Nothing fancy, mind you. It was easy stuff, with lots of beach, water, mountains, and sky. 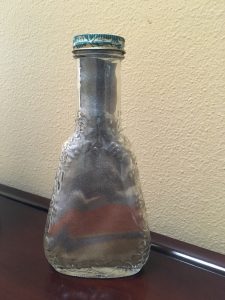 I can’t remember what we charged for the completed bottles, but I do remember our pricing for colored sand. We wrapped a small scoop of sand in newspaper, tied it with twine, and got a nickel for it.

A nickel! Do you know the kind of markup we enjoyed on that? The ROI was insane!

But then we had to pay back the Bank of Mom for sand, food coloring, and the ad in the paper. Luckily, she didn’t charge us interest, and she threw in the bottles for free.

Cashing in Your Rookie Chips

When my sister entered the commercial real estate world, she ... View Post

As part of my Maria Kondo COVID Clean-Out project, I ... View Post

My mother was a cautious, eldest, depression-era, rational child of ... View Post