Back when Fred and I were gainfully employed in large corporations, someone we knew bought a print shop. At the time, we were selling printing presses (Fred) and the paper to put on them (me) and were making sales rep salaries, which are generally higher than average. But the idea of owning a business was intriguing. And terrifying! As we discussed our friends who took the leap and compared their abilities and knowledge to ours, the question we would eventually ask ourselves was “What do those guys have that we don’t?” And the answer was clear: “Balls.” Actually, that was my answer because Fred is far less crass than I am. But he agreed.

Making that leap from job security to self-employment is scary. It is risky business. But everything in business is risky. Success is all about managing that risk. That’s why it’s a good idea for a potential buyer to talk to others further down the ownership road, and to question their motives for making the leap. Someone once told us they wanted to buy a business so they could, “Stick it to the man.” Except when you own a business, you are the man (or woman) and you will work harder than you ever imagined, especially at the beginning. We have a list of other things to consider as a potential business buyer. Go to 10 Things to Consider When You’re Thinking of Buying a Business.

Speaking of risky business, we took the family to Eden Valley Ranch near Oroville for Fred’s 80th. We’d done it the year before because the star-gazing is amazing. Here’s a shot of the ranch taken last year: 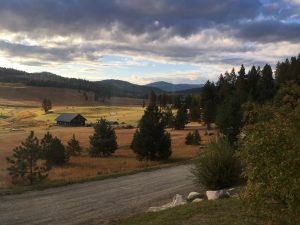 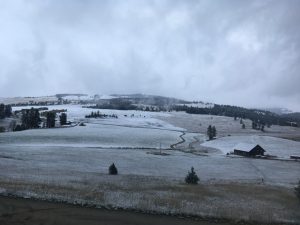 No stars, no sky, and a freakishly early snow! We’d planned for everything except December-like weather. But we managed the risk and still had a great time.