The weather has finally allowed me to get out in the garden. I decided I would first tackle the area next to the driveway, a space that had vexed me for the past few years. During dark and wet winter days, I would stand at the front door and gaze at it, lips pursed, brow wrinkled, as I considered my plan of attack. When I finally got out there and took a knee-high view of it, crawling through flagstones and overgrown ornamental grasses, I was blown away 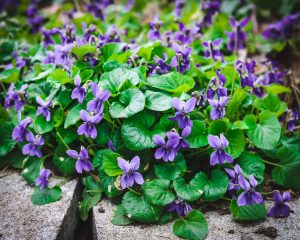 by the Wild Violet starts, and I don’t mean that in a good way. A few of them were offered to me years ago by a person who used to be my friend before she offered me a few Wild Violet starts. We’re having fresh beauty bark delivered soon, so I knew that if I didn’t get rid of them now, they’d just poke their heads up through the bark later and thank me for the incubating layer. So I took out my trusty Japanese Nejiri hand hoe and went at it. Hour after hour, day after day, I whacked and pulled and swore at my ex-friend. I moved flagstones, transplanted items that had wintered in pots, and trimmed the Corkscrew Rush. For now, I’m done with it, although when you’re a gardener, nothing is ever truly “done”.

Then I made the mistake of taking my first post-monsoon garden tour, getting an intense knee-high view of everything. That’s when I realized that the lovely shade garden north of the house looked horrible. No need for you to hear the sorry details. Suffice it to say that my formerly lovely and favorite area had succumbed to age and neglect.

It’s like owning a business. You dig deeply into a problem that you know you’ve had for years, paying less attention to other things while concentrating on reform, and after you fix that issue, you turn around and realize that behind your back, another issue has risen to take its place. What the … ?

How can you avoid this? Sometimes you can’t, although eyes in the back of your head would be nifty. But there are some things that you can do. Walking around is one of them. I avoided the squishy-grassed garden that got no sun, but had I visited it earlier, it would have been less of a shock and I could have crafted a plan for it. You can see and hear a lot in your company when you get out of the office and walk around. An open-door policy is a good idea as well. Yes, you may hear petty stuff that human beings find irksome but aren’t in your ability to manage or change, but you may also hear some business-related truth that will allow you to nip a problem in the bud.

Thinking of Selling? Here’s the Lease You Can Do.

When meeting with potential clients, The Quincy Group has provided ... View Post

Thank Me. Thank Me Very Much.

Responding: The Simplest and Best Sales Tool of All

My nephew planned to be married in Ojai, California last ... View Post

The weather has finally allowed me to get out in ... View Post

A few years ago I shopped at a shoe store ... View Post
Read All | RSS