I was born to a cautious family, Dad an insurance adjuster who regularly reminded us of the awful things that could happen, and Mom a housewife who did the same, but with safety and nothing actuarial in mind. Our early career choices fit the mold: Susie worked in retail, Barbie was going to be an accountant, and I planned to teach high school English, all low-risk and often long-term jobs, nothing precarious or unpredictable about any of them. 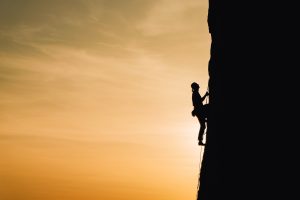 But we soon moved out of those comfortable slots. I went into business-to-business sales, later into ownership of multiple companies with Fred. Susie jumped into commercial real estate, a cutthroat industry if there ever was one, and in newspaper articles, was referred to as a “Maven.” Barbie manages a business with her husband (originally Talking Beer Openers, and now digital chargers the size of a credit card) that they still operate. These choices required suspension of family beliefs about security and employment, choices that eventually paid well, both physically and emotionally, which is why I often urge people to consider purchasing a business or taking positions they might normally avoid, because I figure if I could do it, someone else could do it, too.

When I received an Ancestry.com notification saying there was a new genetic trait rating for Risk Aversion, I could guess where I’d be. I believe in self-determination, but previous traits have been spot-on: I’m in the 80th percentile for remembering dreams (I vividly reveal them to Fred first thing in the morning while he stares blankly into the middle distance), and in the 80th percentile for being a morning person. (My friends have long griped about my desire to leave parties early, and I remind them that I get up at six a.m. or before.)

I was in the 60th percentile for Risk Aversion, making me less likely to take risks than 60% of the population, not as overwhelming as dream-remembering or being a morning person, but interesting nonetheless. Did our parents share those lessons with us because they observed and absorbed the same lessons from their parents and the world around them, or were they genetically pre-disposed to embrace caution and pass it on? Whatever their reasons, my sisters and I pushed against what we’d learned and against our DNA, and it was worth the effort.

I’m waiting for a trait announcement for Crappy Sinuses and Hips Made for Child-Bearing, but I already know where I’ll end up on that scale.

<p>Subscribe to be notified of new blog posts</p>

I’ve seen it often in my work career of over ... View Post 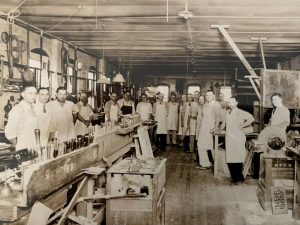 This is a picture of my pattern-maker grandfather and fellow ... View Post

I never did any Quiet Quitting or took my foot ... View Post

I was born to a cautious family, Dad an insurance ... View Post
Read All | RSS