This morning I attended a webinar with 200 other business brokers where the employees of the BizBuySell website explained how we could improve our sales processes. It included a helpful analytics geek from Google who spoke about company visibility and SEO. After the presentations, a panel of brokers from each geographic region of the US, all of them deeply experienced, talked about the current market. While the media is filled with dreadful images and prognostications – and I’m not negating the concerns or the predictions, it’s just the constancy of them that can burn your brain – it still remains a great year to buy or sell a business. Money is relatively cheap, and people are ready to make changes after living through some truly bizarre times. So although it sometimes seems that Armageddon will take us all before the Mariners ever win a pennant, there are still things to cheer about.

Yesterday I learned another lesson in perspective. It was the day of my brother-in-law’s official send-off. He’d passed away last November, but due to COVID, we couldn’t gather. It was a perfect day. He was a Vietnam veteran and Purple Heart hero, so there was a 21-gun salute, a ceremonial folding of the flag, Amazing Grace on a bagpipe, 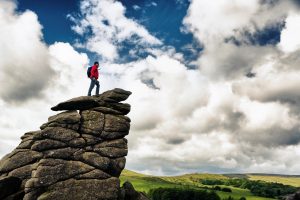 and taps from a soldier standing on a nearby hill; in other words, everything that is guaranteed to both thrill you and choke you up. Afterwards, there was a party in his honor at a golf club. The sun was out, the wide doors were open to the patio, and we were all surrounded by long-time family and friends. Again, it’s all about perspective. You can go down the bad news/social media rat holes, but in the end, what truly matters was what we saw yesterday: A joyful mourning, with a family surrounded by children, grandchildren, cousins, friends.

Here’s another thing about perspective: My brother-in-law and sister had a cabin on Whidbey Island near our old place, except theirs was no-bank waterfront while we sat on a hill. We spent a lot of time at their beach over the years, and got to know the neighbors there. About an hour into the festivities yesterday, I began to realize that all the beach people looked short to me, much shorter than they seemed to be on Whidbey. I was conversing with them eye-to-eye, but I was more accustomed looking up at them. I found it odd and curious, and then after another beer – Who’s counting? It was a funeral! – I realized what it was. When we’d see them on the island, nine times out of ten we’d be sitting in beach chairs inches from the sand, the kind that are so low you need the help of a construction crane to stand up. So yes, we’d been looking up at them for years.

There’s a lesson in all of this: If you need a fresh perspective, stand up every once in a while and take a look around.

Girls in the Drumline

I was in light manufacturing when I was offered my ... View Post

You Can Go Home Again. Briefly.

Once my father quit the Illinois State Patrol and went ... View Post

I read an article last year about a health-tracking bracelet ... View Post

Embrace Change, but What the Hell … ?

I’ve often mentioned the need for anyone in business, whether ... View Post