I was initially unaware of the identification of the tiny naked creatures hopping around in the center of the roadway, so in the moment, I did not say I almost hit a littler of piglets, but shouted, “What the **** were those?”

We ran in to them (figuratively, not literally) while driving a hilly, forested highway above the Mississippi River bottoms. The litter was feasting on roadkill when they almost became what they were feasting on. After some discussion, my sister’s Google search confirmed that yes, indeed, there were wild pigs in that area. They were the most unique creatures that we didn’t hit, but we saw plenty of garden-variety wildlife that others had as we drove north from St. Louis to Quincy to Moline, and then did the reverse trip. It provided us with this blog title and a fresh new motto for the state of our birth, so much better than “State Sovereignty, National Union.” I know. You thought it was “Land of Lincoln.” So did I, until I just looked it up. 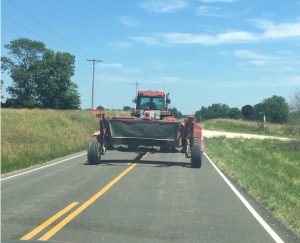 crossing decisions. Bored, and because we were both in sales and marketing, we began spinning out initiatives for how the state might monetize this and make lemonade out of squashed lemons: The Illinois State Department of Roadkill Tourist Division; grade school science field trips (Hey Kids! ID That Kill!); Top Chef: Illinois Roadkill; Roadkill Dynasty; Keeping Up with the Roadkill, which would, of course, be scripted: Release the possums!

I’d hoped as I wrote this that some work/life connection might come to me because that’s what I do here, but I’m still in vacation mode and got bupkis. Look both ways before heading in a new direction? Make lemonade out of lemons? When you have issues, it’s usually the raccoons who cause trouble but beware of the litter of pigs in the middle of the road because anything can happen?

Our west coast family asked for pictures of our trip, so we sent a slew of them that looked pretty much like the image with this blog.