I graduated from college with an English degree in 1972. I’d planned to be a high school teacher, but there were Baby Boomers in the hundreds of thousands who had the same idea, and many of them had actually studied and hadn’t skipped classes, making it easier for them to snag the few openings available. I laughed away my inability to 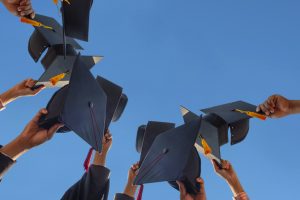 get a job by explaining to friends and family that I’d realized too late that kids in high school knew how to speak English already, rendering my degree useless. That usually elicited a chuckle, something I needed badly at the time. Eventually I went another route entirely – typical of many liberal arts majors – but my four years in college weren’t totally wasted. I learned a great deal while in the costly hammock strung between childhood home and a life of my own.

Given that academic background, I find it interesting that I know so few people who have a degree in business. In fact, over my past 50 years in the work world, I’m not sure I’ve ever known anyone with a Masters in Business Administration, or even someone with an undergraduate business degree, and yet I’ve known a lot of very smart and successful business people. If higher education comes up in a conversation with these effective leaders, they might tell you that they graduated from the School of Hard Knocks or Reality U. Over the years, I’ve learned a great deal from them.

Although they had no degrees hanging on the wall to show for it, several of my bosses and my husband were MBWAs. That stands for Management by Walking Around, aka Management by Wandering Around. They made daily tours of the factories, offices, and warehouses, greeting every employee by name, asking after family members, asking how the job was going. They could also keep an eye peeled while on tour, and spot things like orders sitting too long in one place, or a pallet of mystery product not on the books, or machinery idled or being misused. To the employee, the walking around looked like nothing more than an amicable stroll, but it served as an opportunity to check the pulse of a place without sending everyone into a tizzy because the boss was poking around in areas where he/she never poked before. If you walk daily, no one questions it.

There are also recent studies that promote the idea of getting up from your desk more often during the day, noting that people who stay glued to their chairs are at greater risk of an earlier demise, so not only does it make sense from a company health standpoint, it makes sense for your own health as well.

Cheers, and walk on!