This is a picture of my grandson Michael in his boat. He is either going ahead to scout out a good tie-up spot for the night, or he’s trying to escape us. I should explain. 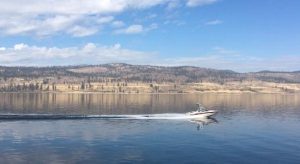 Some of our family spent three nights at Lake Roosevelt on a houseboat bigger than my first apartment. It was a spectacular trip. We were out in the middle of nowhere with little or no digital connectivity, close to the earth but without the concerns of the world, suspended in golden gossamer. We were eight adults and two children, and I’m guessing that since my grandson is now almost 34, I need to put him in the adult column. Actually, he was the adult for all of us. Michael was our rock.

He was the first off the houseboat when we came to shore, the first to grab the sledgehammer to put in the giant stakes that we tied to, the first to see what needed to be done. If some machinery or do-dad wouldn’t come on or wouldn’t turn off, if mysterious lights flickered on the master board, if something smelled funny, he was the go-to guy. If we’d had a drinking game called “Drink every time you hear ‘Michael, could you take a look at this?’” we’d all be in detox right now. He used his boat to scout ahead, or to race back to the marina to buy replenishments at the store or look for things forgotten in the cars, or to pull people in water toys, or to take us further into coves and backwaters where the houseboat wouldn’t fit. I don’t know what we would have done without him.

Not only is someone like Michael valuable to our family, but businesses would do well to have a Michael, too. Someone to scout ahead, think strategically, and plan accordingly. Someone to stop and listen to the drumbeat of what’s happening, who will pull people forward, who’s quietly watchful of everything around him/her. In a small business, it might be the owner, but any employee can play this role for a company. And you find someone like that, consider yourself lucky.

Girls in the Drumline

I was in light manufacturing when I was offered my ... View Post

You Can Go Home Again. Briefly.

Once my father quit the Illinois State Patrol and went ... View Post

I read an article last year about a health-tracking bracelet ... View Post

Embrace Change, but What the Hell … ?

I’ve often mentioned the need for anyone in business, whether ... View Post