Fred and I attended a charitable event in a large downtown Seattle hotel ballroom back when auctions were all the rage. My largest client’s CFO was the charity chairperson, so we went in her support. At auctions, supporters contribute gifts that can include airline tickets, special chef-prepared private dinners, social events with locally famous people, time at vacation homes in Puerto Vallarta, etc. These high earners were auctioned off after dinner, live. Smaller items were generally part of the Silent Auction, which included things like jewelry, sports tickets, and cases of wine. They were displayed on tables at the edge of the room, and attendees had an opportunity to put a dollar figure and bid number on a sheet of paper next to it.

I decided to increase my support by creating a basket I called “Gardener’s Delight.” I artfully filled it with seeds, an attractive tool set, and several books about gardening, weaving ivy around the handle and fashioning a pair of garden gloves into a bow. I was proud of it, and hoped it would fetch a nice figure for the charity.

The first thing I did after entering the ballroom was search the silent auction tables for my offering. It wasn’t there. I was crushed! I thought I’d followed the rules and delivered it to the right place at the right time, but it was nowhere to be seen. Dejected, I found our table of 10 and introduced myself. We only knew a few people there, since some of my client’s customers were also invited on the client’s dime. I sucked down several free champagnes while trying to make conversation with our tablemates, all the while wondering where my basket was. I barely glanced at the live auction book that had been sitting on my plate.

As dessert was served, a video about the charity was shown, and the CFO made a plea for support and introduced the auctioneer. I grabbed our bid card, determined to get some feel-goods by bidding on something we didn’t need. To my intense surprise and delight, my basket was the first item up. Someone had inexplicably decided it was worthy of opening the live auction. Brandishing my bid card, I leapt to my feet. “That’s my basket!!!” I cried, pointing, as people around us chuckled. I can’t remember what the basket went for, but I was too exhilarated to care. 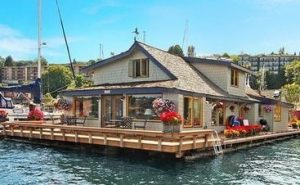 You probably think I’m going to offer this as a lesson in staying upbeat and positive under difficult circumstance, but I’m not. I’m making a case instead for humility and prudence.

As they reached the last item, they showed pictures on the large screens throughout the room. Everyone immediately knew what it was: The Sleepless in Seattle houseboat. The owners were offering a weekend stay. It went for thousands of dollars, and as everyone cheered, the man sitting next to me, my customer’s customer, leaned closer to me and whispered, “That’s my home.”

When my little sister Barbie was in the Brownies, a ... View Post

What Makes a Great Sales Rep?

In my youth, I had a lot of preconceived notions ... View Post

My mother, an eldest, Midwestern, Germanic child of the Depression, ... View Post

Since the beginning of this pandemic, I’ve taken more classes ... View Post

The Land of Wishful Thinking

Years ago, Fred was hired to perform a process audit ... View Post
Read All | RSS